A couple of literature from “anonymous” sources….

The first scientific paper using google glasses (or at least chemistry related paper) is out. And what’s better than sponsoring it with this kind of amazing TOC????

Few questions arise from this picture. Are the google glasses safe for the lab? I know quite some safety sheriffs that will be not so happy to see people working around just with the google glass. Then, why on earth the labcoat is striped????
The paper is here, enjoy.

Second paper of the day…. Apparently T-BAG is a well known term in the surface chemistry world…… if you don’t know the other meaning, DO NOT walk around the department asking explanation to random people…. DO NOT!!!

The publisher of the august journalScienceis to launch its first open-access journal in early 2015. The nonprofit American Association for the Advancement of Science (AAAS) announced the new online-only broad-discipline journal, to be calledScience Advances, today ahead of the AAAS annual meeting in Chicago.

“Science Advanceswould aspire to uphold editorial standards on a par with journals such asNature CommunicationsorPNAS[not open-access], in terms of the quality of papers,” says Marcia McNutt, the editor-in-chief ofScience.

That distinction suggests that the AAAS intends to place a quality bar on papers being published in its new journal, and that it will not adopt thelucrativemodel of open-access journals which publish any papers that peer reviewers deem scientifically sound.

The journal will be funded by upfront fees paid per article — a commonopen-access business model— which AAAS executive publisher and CEO Alan Leshner says would be ”within industry norms and competitive with similar journals.” (Nature Communicationscharges between US$4800-$5200 for publication). It will also, as Leshner and McNutt explain in aneditorialpublished today inScience, be staffed by researchers, rather than a separate team of professional editors.

Science Advances will enter a very crowded, andfast-growing, open-access publishing market. Almost every major publisher and society now has a thriving open-access business — helped along by national and institutional mandates to publish open-access research, and by the squeeze on library subscription budgets which has meant that new subscription journals find it hard to break into the market.

Some 11% of all research papers were published in immediate-open-access journals in 2013 (according todatafrom Thomson Reuters’ Web of Science), up from a mere 2% in 2002.

On June 14, SpaceX's Grasshopper flew 325 m (1066 feet)--higher than Manhattan's Chrysler Building--before smoothly landing back on the pad. For the first time in this test, Grasshopper made use of its full navigation sensor suite with the F9-R closed loop control flight algorithms to accomplish a precision landing. Most rockets are equipped with sensors to determine position, but these sensors are generally not accurate enough to accomplish the type of precision landing necessary with Grasshopper.
Previous Grasshopper tests relied on the other rocket sensors but for this test, an additional, higher accuracy sensor was in the control loop. In other words, SpaceX was directly controlling the vehicle based on new sensor readings, adding a new level of accuracy in sensing the distance between Grasshopper and the ground, enabling a more precise landing.
Grasshopper is a 10-story Vertical Takeoff Vertical Landing (VTVL) vehicle designed to test the technologies needed to return a rocket back to Earth intact. While most rockets are designed to burn up on atmosphere reentry, SpaceX rockets are being designed not only to withstand reentry, but also to return to the launch pad for a vertical landing. The Grasshopper VTVL vehicle represents a critical step towards this goal.
Grasshopper consists of a Falcon 9 rocket first stage tank, Merlin 1D engine, four steel and aluminum landing legs with hydraulic dampers, and a steel support structure.

‘tsundoku’ - the Japanese word for buying books... by everythingontheinternetistrue
Monday June 3rd, 2013 at 12:07 AM ‘tsundoku’ - the Japanese word for buying books & not reading them, leaving them to pile up. Who else is guilty of this?

satadru
reply
I think there's a related concept of making new friends but then being a derelict and not hangout out with them.
New York, NY

wyeager
reply
I'm going to read them all. All of them!
Blur Area

namesj
do you have 'nough time ??

namesj
I wish i had..

kazriko
I do this with games and books both.

How high can a human throw something?

—Irish Dave on the Isle of Man

Humans are good at throwing things. In fact, we’re great at it; no other animal can throw stuff like we can.

It's true that chimpanzees hurl feces (and, on rare occasions, stones), but they’re not nearly as accurate or precise as humans.[1][2]Antlionsthrow sand, but they don’t aim it. Archerfishhunt insects by throwing water droplets, but they use specialized mouths instead of arms. Horned lizardsshoot jets of blood from their eyes for distances of up to five feet. I don’t know why they do this because whenever I reach the phrase “shoot jets of blood from their eyes” in an article I just stop there and stare at it until I need to lie down. So while there are other animals that use projectiles, we’re just about the only animal that can grab a random object and reliably nail a target. In fact, we’re so good at it that some researchers have suggested rock-throwing played a central role in the evolution of the modern human brain.[3][4]

Throwing is hard. In order to deliver a baseball to a batter, a pitcher has to release the ball at exactly the right point in the throw. A timing error of half a millisecond in either direction is enough to cause the ball to miss the strike zone.[5]

To put that in perspective, it takes about fivemilliseconds for the fastest nerve impulse to travel the length of the arm.[6] That means that when your arm is still rotating toward the correct position, the signal to release the ball is already at your wrist. In terms of timing, this is like a drummer dropping a drumstick from the 10th story and hitting a drum on the ground on the correct beat.

We seem to be much better at throwing things forward than throwing them upward. Since we’re going for maximum height, we could use projectiles that curve upward when you throw them forward; the Aerobie OrbitersI had when I was a kid often got stuck in the highest treetops. But we could also sidestep the whole problem by using a device like this one:

It could be a springboard, a greased chute, or even a dangling sling—anything that redirects the object upward without adding to—or subtracting from—its speed. Of course, we could also try this: But the deflector box seems easier.

I ran through the basic aerodynamic calculations for a baseball thrown at various speeds. I will give these in units of giraffes: The average person can probably throw a baseball at least three giraffes high: Someone with a reasonably good arm could manage five: A pitcher with an 80 mph fastball could manage ten giraffes: Aroldis Chapman, the holder of the world record for fastest recorded pitch (105 mph), could in theory launch a baseball 14 giraffes high: But what about projectiles other than a baseball? Obviously, with the aid of tools like slings, crossbows, or the curved xisterascoops in jai alai, we can launch projectiles much faster than that. But for this question, let’s assume we stick to bare-handed throwing.

A baseball is probably not the ideal projectile, but it’s hard to find speed data on other kinds of thrown objects. Fortunately, a British javelin thrower named Roald Bradstock held a random object throwing competition, in which he threw everything from dead fish to an actual kitchen sink. Bradstock’s experience gives us a lot of useful data (and a lot of other data, too). In particular, it suggests a potentially superior projectile: A golf ball.

Few professional athletes have been recorded throwing golf balls. Fortunately, Bradstock has, and he claims a record throw (to first contact with the ground) of 170 yards.[7] This involved a running start, but even so, it’s reason to think that a golf ball might work better than a baseball. It makes sense; the limiting factor in baseball pitches is the torque on the elbow, and the lighter golf ball might allow the pitching arm to move slightly faster.

The speed improvement from using a golf ball instead of a baseball would probably not be very large, but it seems plausible that a professional pitcher with some time to practice could throw a golf ball faster than a baseball.

If so, based on aerodynamic calculations, Aroldis Chapman could probably throw a golf ball about sixteen giraffes high: This is probably about the maximum possible altitude for a thrown object.

… unless you count the technique by which any five-year-old can beat all these records easily:

copyninja
reply
I wonder how many giraffe's (high) I can throw ;-)
India

Alpha_Cluster
reply
We should measure more things in giraffes.

"... gives us a lot of useful data (and a lot of other data, too)" will be appearing in every summary report I write from here on out.
Oakland, CA

aliasbee
Summary for everything ever written almost. You can squeeze useful data with the ease of squeezing fluid out of a rock from most things, but EVERYTHING has a lot of other data too. :-D

cjmcnamara
reply
My brain knew which letters to type here 5 milliseconds ago. 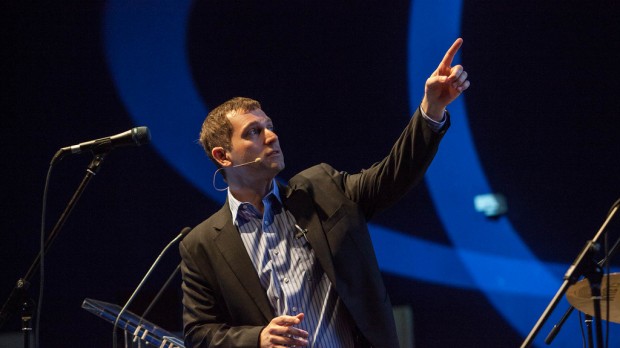 I join forces with Pixxa, makers of Perspective, to present a workshop on the future of presentation.

After giving dozens of talks in the last year using an iPad with Perspective I’ve learned a few things. Having also spent years using Powerpoint to try to do the same thing, I’ve experienced first hand how slideware has gotten in the way of great storytelling.

So we teamed up to understand how stories come alive using data and drew inspiration from Aristotle, Welles, Tufte and Rosling to build a new theory of presentation.

We believe that we have summoned up enough cohesion in the theory to put it forward to an audience and tell the story of storytelling; practicing what we preach, so to speak.

Here are some of the questions we are putting forward:

At a minimum, the workshop is designed to recruit and equip a new cadre (no more than 50) with a new algorithm of presentation built on rhetorical, theatrical and cinematic foundations.

We call the workshop Airshow. June 9th, 10am to 4pm, the day before WWDC, in San Francisco. Sign up here.